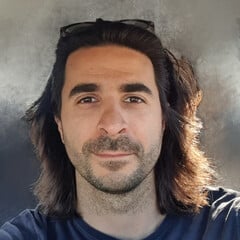 I am a figurative sculptor, living and working in London. My work combines the classicism of shape and form while being imbued with emotion. I use various techniques which allows me to focus more on the story telling side and treatment of form. Influenced by my traditional background in drawing I use the line and nuanced gestures to give the anatomically rigorous sculptures, the illusion of life.

While using all the traditional tools, I grew to know the digital ones too. This eventually led to a supervision role in the film/games industry. I am currently operating as VFX/Character Supervisor. Over the years I had worked in various studios such as: BLUR Studios, Blizzard Ent., Industrial Light & Magic, MPC, Framestore, Untold Studios and more.